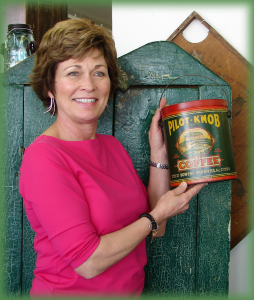 For Larry Tuttle, the answer is because they were a natural thing for him to collect; it tied right in with his family business. But he got into it by accident, and then was “bitten” by the collecting “bug”.

How did he get started? As it happened, Larry was presented with a custom-made carved-and-pieced wood garbage truck replica by the local company where he bought the large trash-hauling containers for his company. Well, that was it! That one truck was all it took to give Larry the collecting “bug”……..and the hunt was on for TOY GARBAGE TRUCKS! 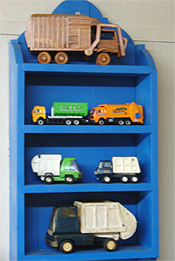 He still has that first replica – it now sits atop the brightest blue show-shelf in Larry’s collection, seen here to the left.

How did Larry come to be in the trash business? Well, it was his family’s business, started by his Dad, RW “Buck” Tuttle, in 1951. As it happened, Dad’s health started declining 1963, and Larry returned from Appalachian State University to keep the business going.

The business was called Forsyth Container Service, and it was actually based in Winston-Salem, North Carolina. Twenty-odd years later, in 1987, Larry got an offer he couldn’t refuse from Waste Management and sold out to them.

At the present time, Larry has around 125 toy garbage trucks, all displayed neatly on shelves in his office and game room. 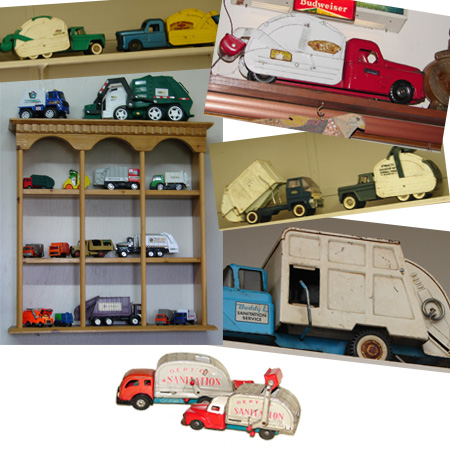